Name of the book: RUN

In 2009, he co-wrote "Serial" with JA Konrath, which has been downloaded over 500,000 times and topped the Kindle bestseller list for 4 weeks. That story and ABANDON have also been optioned for film. He is currently at work with JA Konrath on the novel STIRRED, the conclusion to his Andrew Z. Thomas series. Blake lives in Colorado. His website is www.blakecrouch.com.

For fans of Stephen King, Dean Koontz, and Thomas Harris, picture this: a landscape of American genocide...

5 D A Y S A G O
A rash of bizarre murders swept the country…
Senseless. Brutal. Seemingly unconnected.
A cop walked into a nursing home and unloaded his weapons on elderly and staff alike.
A mass of school shootings.
Prison riots of unprecedented brutality.
Mind-boggling acts of violence in every state.

T O N I G H T
They’re reading the names of those to be killed on the Emergency Broadcast System. You are listening over the battery-powered radio on your kitchen table, and they’ve just read yours.

Your name is Jack Colclough. You have a wife, a daughter, and a young son. You live in Albuquerque, New Mexico. People are coming to your house to kill you and your family. You don’t know why, but you don’t have time to think about that any more.

You only have time to…. 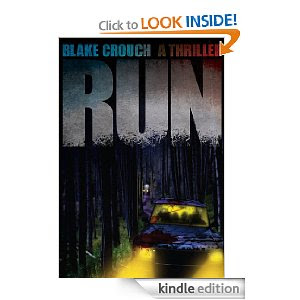 I hope the intensity of the pacing, the realism, and most of all, that they fall in love with the characters.

A simple question that popped into my mind a couple years ago....what would an American genocide look like?

When I was a senior in high school and set out to write my first novel.

Because these are the types of books that I love to read.

I will typically try to hit 1000 words per day. When I have those 1000, I'll take a break, and then read through them again. Usually, I find that I've merely sketched out the scene and I'll go back in and bring more detail. I do this for several months until I have a first draft. Then I share it with a few trusted friends to get their take.

About 4 months, give or take.

At first, just as an experiment to see what would happen, and as a way to get my short stories to a wider audience. Now...because it gives the writer complete and total control.

Read a lot, write a lot, rinse, repeat. There's truly no secret other than immersing yourself in the consumption and creation of the written word.
Posted by Unknown at 12:18 AM