I'm a former newspaper reporter and the author of numerous published books. I'm currently published by Crossroad Press which has brought out many of my original novels in Kindle, Nook and other e-book editions. In addition to fiction writing, I've worked as a librarian and web content editor. In 2010, I earned an MFA from Goddard College. I met my wife when we worked at the same newspaper. She’s a healthcare marketing executive, and we are the custodians of four cats.


How would you describe your book? 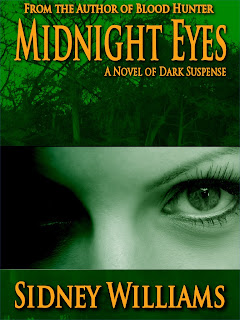 It’s a novel, a psychological thriller with mystery elements. It’s about the brutal murders of several men in a small Louisiana city. All are possibly involved with a mysterious woman. The unsolved murders create a political firestorm for the sheriff. He has to call in his estranged son, Wayland Hood, who’s a behavioral science specialist. A TV reporter is in the mix as well, pursuing her own ideas about the case which involve a theory that the present murders are tied to an attack years earlier. It all builds to an action climax.

I hope they find that it has a lot of suspense and mystery with surprising twists. Several plot and character strands converge, unveiling the big picture as the story unfolds. It’s not just about identifying a killer but unlocking a number of guilty secrets underlying the central city’s veneer.

The strained relationship between father and son is at the core of everything also. They have to work out their personal issues while trying to solve the case. That means a lot of conflict. Wayland is plagued by his mother’s death and by the stress of his FBI work. Coming home and working with his father is a tough journey for him and challenges a lot of what he’s about. Jemy Reardon, the TV reporter, is an interesting character to me also. She’s an ethical journalist with an editor who has a vendetta. She has to work on the big story while appeasing him and maintaining her personal standards. Everything builds toward the climax in rural Louisiana. There’s a confrontation, danger for the core characters and an action sequence that’s kind of unlike what, I believe, readers have seen. I got the idea for that portion while working as a librarian. I had to look up some material for a patron, and I thought the activity might fold well into a storyline.

When I worked for years as a reporter in Central Louisiana, I saw cops at work, and experienced news from the inside also. This is kind of the culmination of my journalism experience and of seeing both sides of the coin. I covered a lot of crime as a general assignment reporter. This novel is not based on any one case, but it reflects what I observed about human behavior. It seemed in the city where I worked, which was medium sized, we had one major, heinous crime a year. Some of those still haunt me because I was exposed to details even when I didn’t visit the scenes. The human nature that drove some of those cases is kind of at the core of this story.

When I was very young. I wrote as a teen. I completed a trunk novel when I was in college, a private eye story. I decided I didn’t have anything new at that time to bring to what Chandler and Ross MacDonald had done, so I looked in new directions. I wrote into the wee hours of the morning when I was a beginning reporter. It was kind of brutal to balance–news work and fiction writing, but I was determined not to let my newspaper job destroy what I wanted to do. You hear the same story from many writers. They wrote on the bus on the way to work. They scribbled wherever they could. They found a balance. I think it indicates that somehow writing is part of the genetic makeup of those who do it. I really feel a kinship with everyone who’s driven to pursue creative effort. I don’t ever want to sound pretentious. That just seems to be true.

I guess early on. I guess I always wanted to tell stories with some underlying meaning even though I was writing genre fiction. I read Faulkner when I was a young reporter or tried to. I’ve been more successful in recent years in reading and starting to understand Faulkner. Absalom, Absalom is a fabulous book if you can penetrate it. I pursued an MFA because I wanted to understand thematic writing better. I want to write books that people want to read, but I want to inject them with the true reflection of the human spirit and human experience that, I believe, elevates a work. Though I’m more of a literalist, I’m also intrigued by books like The Wind Up Bird Chronicle by Haruki Murakami that also that function metaphorically and kind of mysteriously.

In high school at least. I read Chandler, Poe, Lovecraft, Stephen King. In reading, I knew something like that was what I wanted to do. I knew I wanted to do something creative anyway, and to write a book you just have to sit down and write it. You didn’t have to go penetrate the Hollywood system or the New York theater world. I’m from the South. You couldn’t throw a stick and hit a writing program when I was a kid. I had Writer’s Digest, a couple of encouraging teachers and I read and observed and forged ahead.

As I mentioned, I wrote in the wee hours in the early days. I’m a web editor for a healthcare system now, so I’m in a corporate setting. I write in the mornings before work now. I’m more alert, after a cup of coffee, during that time. I feel unfettered, unburdened. Often I sit on my sofa with a MacBook, put the shopping channels on mute and hammer away.

I’m slower than I once was. I contemplate narrative decisions more these days. I have a fantasy thriller that I’ve been working on for a while now and that will take me a while to finish. Midnight Eyes was written in a creative burst a couple of years after I stopped working in newspapers. It took probably six months for the first draft and then a few months of rewriting. My first agent on it kind of crashed and burned, so I put it aside. When I started having books roll out from Crossroad Press, I decided to look at it again. I did a five-month re-write, updating and re-polishing. Happily I was really pleased reading the plotting cold. I surprised myself with a few twists. Sometimes I’d say: “OK, I can cut this.” Then I’d get several chapters forward and realize: “THAT’S why I put that in. OK it stays.”

It’s a changing world. That’s where the readers are moving, and David Niall Wilson of Crossroad approached me about bringing my backlist out. I thought about it, wondered if I should just let my backlist be a closed chapter of my writing life, let it be something that people find in used bookstores. Then I thought I’d rather have it out there for people to find easily. What I’m writing now is quite different in some ways than what came before, but I’m happy to have the early part of my work available anew

Diligence on all fronts is what’s critical. Write everyday, get something down and revise it until it’s the best you can make it and always look forward. Read and study the craft and don’t worry how anyone else is doing. Don’t worry much about what they’re saying either. If there’s something beneficial learn from it, if it’s a negative personal opinion let it slide.
Posted by Unknown at 12:11 AM