New York Times bestselling author Ruth Harris enjoyed a long career in publishing working as a copywriter, editor and publisher. Her books have sold many millions of copies around the world in hardcover and paperback editions and been translated into 19 languages, published in 25 countries and selected by the Literary Guild and Book-of-the-Month Club. Ms. Harris lives in New York City with her husband, writer Michael Harris. 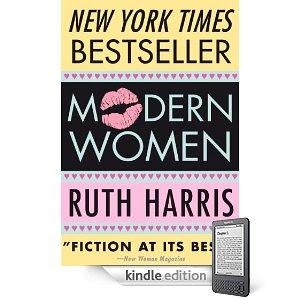 MODERN WOMEN is about three women coping with opportunity—and the men in their lives. They laughed. They cried. They did their best. But would they live happily ever after?

Lincky Desmond: With beauty, brains and money, she married Mr. Right—only to risk it all for Mr. Wrong.
Elly McGrath: She was loyal and idealistic but when faced with the ultimate betrayal, would she be able to stand up for herself?
Jane Gresh: Bawdy, outrageous and determined not to be ignored, she managed to shock the entire country.
Owen Casals: Handsome, successful, magnetic. He would marry one, betray another and make one of them very, very rich.

The characters are lively and appealing, people the reader can identify with & root for. There is also lots of humor, some of it quite spicy.

My friends and I encountered many of the same successes and setbacks portrayed in the novel and it occurred to me we were representative of our generation and the volatile times described in the book.

In the fourth grade & it was a disaster. We were supposed to write a story and I did: it was about a huge flood during which all hell broke loose, very vividly described. My teacher was appalled by my gory imagination and yelled at me in front of the class. I suppose today it would be praised as apocalyptic fiction—but not way back when! I didn’t write for many years after although I was always compulsive reader. Miss Nose-In-A-Book.

Still don’t think so. I tend to take a skeptical view of such claims.

When I found out I could get paid for it.

Because people’s lives are interesting and the intersection between culture and the individual is fascinating and ever-changing.

No set time, varies from book to book.

Because it offers a huge opportunity for writers to avoid the narrowing window of conventional publishers.