Misty Evans writes the award-winning Super Agent and Witches Anonymous series, as well as the new Lost Worlds series, featuring Soul Survivor, with Carina Press. Her debut novel, Operation Sheba, Super Agent Series Book 1, won the CataNetwork Reviewers’ Choice Award in 2008, a CAPA nomination in 2009, and the New England Reader’s Choice Bean Pot Award for Best Romantic Suspense in 2010. Operation Sheba was the number one Kindle Romantic Suspense book and a Top 10 Kindle bestseller for over a month in 2010. I’d Rather Be In Paris, the second book in her Super Agent Series, was nominated for a 2009 CAPA for Best Romantic Suspense, and along with the third book in the series, Proof of Life, was a Top 100 Kindle Bestseller in 2010. Soul Survivor won the Utah RWA’s Great Beginnings Contest in 2010.

Misty is currently at work on the next books in all her series. She likes her coffee black, her conspiracy stories juicy, and her wicked characters dressed in couture. Learn more and sign up for her newsletter at www.readmistyevans.com. Like her author page on Facebook or follow her on Twitter. 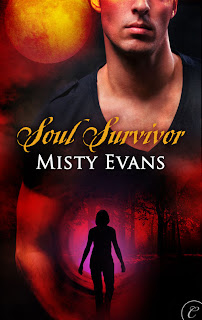 Readers will find suspense, humor, and romance in my story. There’s the idea of soul mates, reincarnation, immortality and what family means to each of us…how far we’re willing to go to save them. There’s also a truly evil antagonist. Mwahaha.

I wrote the kitchen scene where Keva tries to convince Rife he’s her reincarnated soul mate for a contest. I didn’t win that one, but the scene and the characters wouldn’t leave me alone. Keva even showed up in a dream I had and I never dream about my characters, so that weirded me out. Eventually, the first chapter went on to win the Great Beginnings Contest and I sold the story to Carina Press a few months later.

When I was in 4th grade, I won second place in an essay contest, writing about my dad. My essay appeared in the local paper, and once I saw my name and my essay in print, I started writing all kinds of stories.

After 9/11. I’d submitted nonfiction articles to a parenting magazine and a few were printed, but after 9/11, I got serious about writing fiction. The CIA and the fight against terrorism inspired my first series.

I always wanted to write a book—not just one, but dozens. I have way more stories in my head than I can ever get down on paper!

I write every morning, usually 4-5 days a week. Afternoons are for promo, catching up on fan email, writing lessons for my online classes, etc.

Depends on which series I’m working on. A Super Agent book usually takes 4-5 months. They’re full length novels and require a good deal of research. A Witches Anonymous story takes 2-3 weeks, since they’re novellas and require more imagination than factual research. A Lost Worlds book takes 3-4 months. These stories are around 50 to 55k and do require some research.

Two of my publishers are digital-first publishers and that was one of the reasons I went with them. Digital books are a welcome addition to many readers’ collections and I’ve known this was going to be a huge market for me since the first Kindle was introduced. Now I’m also an indie author and love the freedom I have to reach even more readers.

All the things I’ve learned over the past ten years would fill a book. LOL. My best advice would be to know yourself and what you want out of becoming a published author. Do you homework and make your own path. The publishing world is changing rapidly and it’s crucial you stay up-to-date and informed, so you don’t give away rights you shouldn’t or don’t understand how each avenue works. Talk to other published authors, ask questions and then once you have all the facts, be true to your vision and make your own decision based on what’s right for you.


Look For These Titles by Misty Evans: