Name of the book: Valhalla 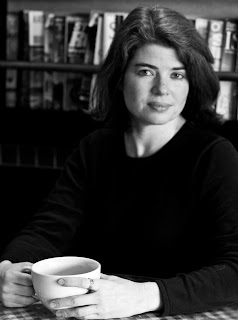 Jennifer Willis is an author, essayist, and journalist in Portland, Oregon. In her non-fiction work, she specializes in topics related to sustainability, spirituality/religion, history, and health. Her articles have appeared in The Oregonian, The Christian Science Monitor, Salon.com, The Portland Tribune, The Writer, Ancestry Magazine, Aish.com, Skirt!, InterfaithFamily.com, Vegetarian Times, Spirituality & Health, and other print and online publications at home and across the globe.

In fiction, she focuses on urban fantasy and playful mayhem. Her new ebook, "Valhalla" is available at Amazon, Barnes & Noble and Goodreads.

Visit her online at jennifer-willis.com.

How would you describe your story/book? 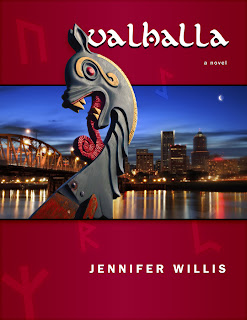 “Valhalla” is a work of YA/urban fantasy, involving the Norse gods having lost their divine powers and working regular jobs in Portland, Oregon, while still fulfilling their obligation to protect the World Tree, and by extension the entire universe. However, one of their own seeks to take possession of the Tree and so destroy the world, and there’s a very powerful but naive 16-year-old witch running about, accidentally calling up Berserker warriors when she thinks she’s casting spells for peace and harmony.

Sixteen-year-old Sally Dahl is a rare, modern-day Norse Witch with more power than she realizes. Playing sick from school in Portland, she's casting rune spells during a rare astronomical convergence to bring about a better, happier planet -- and hoping her parents don't find out.

What Sally doesn't know is that the Norse gods are still around, albeit without their divine powers -- Odin is a high school principal, and blustering Thor is about to lose yet another job as a photocopier repairman. But Heimdall has the perfect cover as a forest ranger while he and his kin hunt for the newly reincarnated World Tree and try to prevent Ragnarok, the literal end of the world that could be timed to the same alignment of stars.

Instead, Sally stumbles across Managarm the Moon Dog, a lost god who seems desperate for her magickal help. But does he really share Sally's vision of a more peaceful world, or are his intentions much, much darker? And what can she do about the ancient Berserker warriors she accidentally calls up, who pledge their allegiance and then demand junk food runs to Voodoo Doughnut and Burgerville?

What I’ve been hearing most often from readers is that they enjoy the re-imagining of mythology for the 21st-century, the fun of having the story set in infamously irreverent Portland, and the humor that runs throughout the story.

While “Valhalla” is tailored to a Young Adult audiene -- so there’s no sex or drug use, some violence and creative cursing without using too many actual “bad” words -- I think I have more adults than young adults reading the ebook right now, so the story does appeal to a wide ranging audience.

I’m afraid I don’t have a particularly inspiring answer to this question! One day as I was driving, I suddenly got the idea that it would be really funny if the great Norse thunderbolt god, Thor, had lost his divine powers (and his hammer) and had to find work as a photocopier repairman. I don’t remember precisely what inspired that thought, but it stuck with me and wouldn’t let go.

A few months later, National Novel Writing Month (NaNoWriMo; nanowrimo.org) was coming around again, and I started pondering what I might like to write about. I was having hot chocolate with another writer when I mentioned this image of “repairman Thor” I had in my head, and it seems to me that within about five minutes, other parts of the story for “Valhalla” started falling into place.

I still had to do a fair amount of research to learn more about the major and minor players in the Norse pantheon and to steep myself more deeply in Norse mythology -- and then to bring in the more human element by fleshing out Sally, the sixteen-year-old human witch who is at the center of it all.

This particular book? “Valhalla” was my NaNoWriMo project in November 2008. I then spent about 2.5 years -- on and off -- rewriting a number of different versions, before publishing the ebook at the end of April 2011.

When did I start writing in general? That’s a tougher question to answer. I’ve always been writing in one form or another, as far back as I can remember. However, because it was something I was always doing, I didn’t take it particularly seriously in terms of career direction for a good while.

As I worked in multimedia, IT and web development, I found my employers coming to me for their writing needs more and more, and a local (Richmond, VA) newspaper editor encouraged me to start freelancing for her paper. Before I knew it, I’d produced a decent portfolio of magazine and newspaper articles, business plans, user guides and more, and I decided in 1999 to focus on writing as a career.

When did you realize that you were a serious writer?

See above. (Got a little ahead of myself there!)

When did you decide that you wanted to write a book?

“Valhalla” is not my first book. I wrote “Rhythm” -- a “visionary fiction” story of a pair of soul twins -- over the course of about two years (1999-2001), and released that book in print in 2001. My writing style and voice have evolved significantly since then: “Rhythm,” while still whimsical, is more literary while “Valhalla” is decidedly quirkier.

Prior to that, I’d thought about writing a book for several years, but had been completely intimidated by the idea. It’s a large and daunting process! It took a while for me to work up the courage to give it a try. As luck would have it, my work group got laid off as part of a large corporate merger in 1999, and I used this as an opportunity to go to graduate school and to focus more seriously on writing -- through taking up technical and journalism projects, and trying my hand at novel-writing with “Rhythm.”

That’s a tough question to answer. A lot of it involves battling procrastination and getting myself to sit still long enough to concentrate on what I’m doing. Once I really engage, however -- whether it’s an essay, a newspaper feature or a novel draft -- it can be difficult to pull myself away from my work.

I still have a tendency to over-research, but I’m glad to have reached a point where I’m much less self-conscious about my writing style and material.

These days, I find I have great success writing first drafts each November when it’s time again for NaNoWriMo. I’ve participated -- and finished -- every year since 2004, and there’s only one NaNoWriMo project that I don’t plan to develop into a published book.

So these days, I’ll write a first draft in 30 insane days. There are now similar opportunities in July (JulNoWriMo) and August (NaNoWriMo Summer Camp) for people who either don’t want to wait until November or can’t do it then. After I’ve cleared this year’s projects from my plate -- because I am booked at this point through the remainder of 2011 -- I look forward to writing at least two first drafts each year.

As others have written, there are many advantages to going the route of indie publishing -- specifically focusing on ebooks. J.A. Konrath, for instance, has posted an enlightening -- and lengthy -- conversation with fellow author Barry Eisler on his blog about going the independent route.

Ebooks and e-readers continue to increase in popularity. Amazon released figures recently indicating that ebook sales from their inventory now outnumber their sales of hardcover and paperback books combined, and with more “established” authors jumping on the indie ebook bandwagon seemingly every day, there's not as much of a stigma associated with self-publishing as there used to be. In fact, many self-published authors (myself included) have adopted the term "indie author" to emphasize the positive opportunities of presenting our work directly to readers rather than going through third parties.

In the case of “Valhalla,” I'd been on the fence about self-publishing an ebook until this past March when I found out about the blockbuster summer movie "Thor," to be released at the beginning of May. While my story isn't at all related to comic books or superheroes, I do draw heavily on the same Norse mythology for my tale -- and Thor is one of my main characters.

Even though I was getting a good response from prospective literary agents while trying to go the more conventional route with “Valhalla,” I figured that if I wanted to take advantage of this unforeseen coincidence with “Thor” I’d have to act right away rather than waiting for the gears of traditional publishing to turn (which can take years). That’s what finally swayed me.

I won’t get into giving advice on the craft of writing. There an countless books and untold blogs dedicated to that very subject. Assuming you’ve completed a manuscript -- and that you’ve also rewritten and revised it a few times, and have gotten input from editors and proofreaders -- your next step is to figure out how you want to have your book published.

Indie publishing isn’t for everyone. It’s a lot of hard work. Even though I knew going in that I was responsible for all of my own marketing, and even though I’d laid out a detailed plan for promoting “Valhalla,” I still found myself unprepared for just how much time and energy these efforts would require. Of course, many traditional publishing houses these days leave it up to the authors to do much (if not all) of their own marketing, so why not go indie and keep more of the proceeds for yourself?

Regardless of which route you choose, study other titles in your genre. Take a look at what’s selling and what’s not -- not so you can try to identify trends and hop on whatever bandwagon is most popular in the moment, but so you can look at how these books have been marketed. What strategies have those authors and publishing channels employed to get readers’ attention? Are there book reviewers who specialize in reviewing books like yours, and how can you get your title into their queue? Definitely get creative with your marketing. You don’t want to be obnoxious or spammy and end up alienating the audiences you most hope to reach, but you’ll also never know if a marketing strategy works until you give it a try.

Other than that, I’ll fall back on encouraging aspiring authors not to give up on themselves. Every writer who has ever had a single word published has stared at that same blank page and has wrestled with the same self-doubts. Your book may not be a global best-seller like “The Da Vinci Code” or the Harry Potter titles. It might not stand the test of time like Homer’s “The Odyssey” or Tolstoy’s “Anna Karenina.” But if you never get your manuscript off of your computer harddrive or out of your notebook and into a form that readers can access, you’ll never know. And isn’t your story worth a try?
Posted by Unknown at 12:46 AM