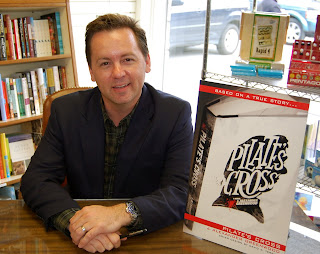 I'm a former journalist, politician, actor, television executive and radio talk show host. I wrote the thriller novel Pilate's Cross, the award winning short story Obsidian, a half dozen or so failed book manuscripts and thousands of press releases in my day job as a public relations consultant.

I reside in Kansas City with my wife and two-and-a-half-year-old daughter. My grandfather was a midlist Western and historical fiction writer who encouraged me to write.

I'm currently working on a sequel to Pilate's Cross and a novella based on the art of my Pilate's Cross book cover artist David Terrill titled What the Gardener Saw. 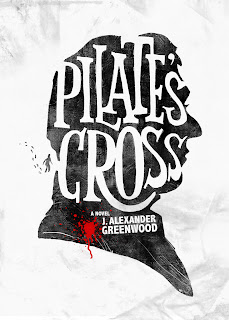 When my career in public relations took me to Peru, Nebraska a few years ago--a place I affectionately call "the smallest town in the world," I found the inspiration for a mystery thriller. I didn't know a soul in the town--I was a total outsider working there as marketing and public relations director and instructor at a small college. The core of this book is about the open secrets that can fester in a community until an outsider raises questions.

When I worked in Peru, every day I'd walk past a plaque in the administration building that honored the college's former president and dean, who both died on the same day in the 1950s. It didn't hint at anything nefarious; it could have been a car wreck for all I knew. I finally asked--and it was more tragic than I ever imagined.
I eventually gained access to police records, crime scene photos, witness affidavits and news coverage of the decades-old murders, but the book is not a thinly veiled fictionalization of an historical event.

The professor's motive was, in the grand scheme of things, terribly petty. Pilate's Cross is inspired by the questions this terrible crime created; but as a work of fiction it's set in a different place and has a more complex motive for the murders.
Nearly all aspects of the book, including the location, characters and most importantly the mystery are strictly from my imagination. However, recent real-life events are chilling in their similarities, and lead me to reconsider marketing the book.

In April 2010 the former president of the college took his own life as news of a financial scandal was about to break. Though I wrote this book three years ago (it was published in December 2009), I had some serious trepidation about promoting it in the wake of this tragedy. The 'college president' character isn't based on my former boss, and I would be very concerned if readers thought he was. Peru was very good to me, and it's very important that people know this book was not meant to mar his memory or upset anyone--especially my friends in Peru, Nebraska.

The blurb:
Inspired by a true story, "Pilate's Cross" follows John Pilate, his sardonic imaginary pal Simon and lovely new friend Kate as they investigate the cold case mystery of a murdered college president. In too deep to wash his hands of the mystery, Pilate risks his life to uncover the truth of what happened in 1963 and why it's just as deadly today.

I've had four book clubs read the book recently. Members tell me they like the characters--that they seem totally plausible and (mostly) likable to them. They also say there is a definite "roller coaster" feel to the pacing. The book ratchets you slowly at first to the top--then once you crest that high point, it lets you go and you don't stop racing until you hit the finish line. It's a good beach or airplane read.

My grandfather was a midlister--he wrote Westerns. On his deathbed he literally told me I should write. That admonition had hung over my head for several years. I wanted to write, but life has a way of throwing other things at you to take up your time. Ultimately, I think I needed to get rid of some bad mojo I gathered in my life leading up to my move to Nebraska---this book was an opportunity to finally write something and tell a fun story. I suppose it's trite to say, but I think I exorcised a few demons along the way.

I've written since I was twelve--nothing particularly good. I mean my teachers said I had potential and could turn a phrase pretty well--but it was only when I hit my late thirties that I felt like I had the confidence to put my work out there.

I suppose when I figured out that I had written for 4 to 6 hours a day, three months straight on a manuscript and then spent another two years editing, rewriting and trying to get it repped. That's when it clicked that I was serious.

Probably when I was twelve. I wanted to be a writer in the worst way, and I have a drawer full of failed manuscripts to prove it.

I love stuff that's a little off balance--a hint of mystery with suspense and thrills. To sum it up, I love The X-Files, and would be perfectly happy writing stories that are mysteries, thrillers or suspense with just a hint of horror--or a combination of all those genres--as long as the characters are relatable like Mulder and Scully. I also occasionally write short stories about relationships that are paranormal or mysterious only in the way the human heart is.

I try to write 1,000 "good" words a day. Once I finish a draft, I rewrite it a few times until I'm satisfied enough to open it to criticism. At that point, I let a few trusted readers give me feedback. I make changes and then send it to an editor. Once I get her notes I give it a final polish and it's done.

When I have focus and not a lot of demands on my time, three to six months. I started my own PR firm last year and have a young daughter, so it's tougher to make that happen. I'm working on getting back into the groove as I complete the sequel to Pilate's Cross and the book I'm collaborating on with David Terrill.

I tried for two years to get an agent and was within inches of finally signing a deal when the economy fell apart and the agent backed away. I loved this book too much to shove it in a drawer, so I started looking for alternatives. I found Smashwords and thought they looked pretty cool. I think Pilate's Cross was among their first 10,000 or so books. I haven't looked back. I went print on demand (POD) in 2010 and it has helped bolster support for the ebook versions by granting me entre to book clubs. Most book clubs that have read my book are about 70% paperback, 30% ereader.

Do the work--and be serious about it. When you think it's finished, show it to people who actually read and love books. Let them give you critiques (listen!). Hire an editor if you can--and get a good cover. I think my cover (by David Terrill) for Pilate's Cross is fantastic--but my covers for my Amazon short stories (Obsidian and Skin and Sand) are self-made and pretty bad. I need to take my own advice about the covers--my artist pal David cringes when I make my own. Finally, don't rush a half-baked book out there--it's easy to do that these days and it makes all indie authors look bad when a book crammed with plot holes, typos and a bad cover hits the market. Oh, and one more thing: if you love writing--truly love it--don't give up. I make very little money on my books, but that's not why I write. If you're doing it because you think you're going to strike oil in your keyboard, well, God bless you but I think you're misguided.
Posted by Unknown at 12:44 AM