Not What She Seems

Victorine graduated from BYU Idaho with an associates degree in art. She designs rubber stamps and sells them to craft stores. Victorine has always loved to read and enjoys crafting stories. Victorine and her husband live in Nebraska where they raise their four children. 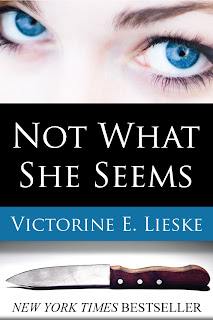 Not What She Seems is a murder mystery laced with suspense and a light romance. It’s about Steven Ashton, a billionaire trying to escape the shallow people of the high society life who falls in love with Emily Grant, a woman with secrets in her past. When Emily disappears Steven finds out she’s running from the law, and his attempts to help her puts himself in danger.

Most people tell me they couldn’t put the book down, which makes me smile because that was one of my goals when writing it. I love a book that grabs me and won’t let go.

I wanted a story that had a mystery, suspense, and a little romance. I thought it would be fun to have a rich business man lying about who he was meet up with someone else lying about their past. That one idea fueled the story.

I’ve always wanted to write a novel. I just thought that would be a cool thing to be able to say. But my life was busy with four kids and a home business, so I never made the time. Then one day, about five years ago, I reached into the car to get my daughter out of her car seat and my back seized up. It was horrible; I literally couldn’t do a thing. That’s when I decided I would write that book I had always wanted to write.

It’s funny, because I never meant to be a serious writer. I wrote a book, and then wanted to know if what I had written was any good. I sought out some authors in a critique group and found out that my book needed a lot of work. I had spent the time to write the book, and I didn’t want to show it to anyone if it wasn’t the best it could be, so I spent four years rewriting it in my spare time. Once it was what I felt was good enough, I wanted others to be able to read it. I found that self-publishing on the Kindle was my best bet at sharing this story. I didn’t realize that I wanted to be a serious writer until my book royalties surpassed my “real” income by quite a bit.

When I was a kid I read a lot. I enjoyed being sucked into a story. That’s when I decided that writing a book would be cool. I started writing a few stories, but they never progressed very far.

I read a lot of mysteries, so I knew I wanted some kind of a mystery in this book. I also love romance, but I’m not attracted to the standard romance novels you see in stores today. So when I wrote Not What She Seems, I kept the steam level down to a couple of kisses.

I like to start at the beginning of a book and write chronologically through. Sometimes I do have to go back and add a scene in here and there, but mostly I write from beginning to end. I also don’t plot, so if there’s a plot twist I don’t usually see it coming until it happens. I usually don’t know how a story will end until I get there.

Not What She Seems was unique because I was literally on my back 24/7 and had nothing to do, so it took me one week to finish the first draft. I had no idea how to write a novel either, so I just let the words flow uncensored. It took me four years after that to revise it into something publishable. My second book, The Overtaking, took me eight months to finish the first draft, and another month of revisions and editing.

I did a lot of research before I published. I found out that a traditional deal for a first time author was hard to get. It also would be a small advance, around $5,000 is standard. Then a small print run would follow, and if the books didn’t sell well in the first six months bookstores would return them and the book would go out of print. I didn’t like my odds at reaching a lot of people. I also didn’t like the thought of spending my advance trying to market the book. I found out that it didn’t cost anything to put the book on Kindle and other eReaders, and some authors were selling quite a bit. I liked being in charge of my book’s destiny.

My best advice comes way before clicking “publish.” Join a critique group and get detailed critiques on each and every chapter. Critiquecircle.com is wonderful and allows you to post a chapter a week. You’ll also learn from critiquing others. I couldn’t offer any better advice. Writers are wonderful people, and truly help each other succeed.
Posted by Unknown at 12:07 AM