Interview with Sarah of Saffina Desforges

Mark has written for years, having worked in television, radio and journalism, whilst Sarah is relatively new to the game! 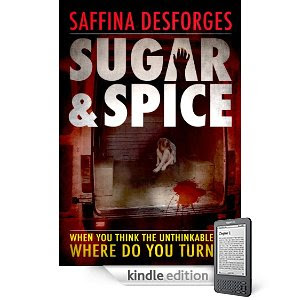 Inspired by a news story of a man who begged a Judge to give him a longer sentence, because he knew he would harm another child if released without treatment, Sugar & Spice is meticulously researched, asking the questions society prefers not to have answered.
At once disquieting and challenging, Sugar & Spice is car-crash reading.
~
It's every parent's worst nightmare: A child fails to return home. As hours turn to days, all they can do is hope. Some children never come back...
Would you trust a convicted sex offender to help you find your daughter's killer? Claire did...
Teaming up with a second-year psychology student and a fourteen year-old truant schoolboy, Sugar & Spice is the story of a mother's fight to bring one man's reign of terror to an end.
~
Be warned: In Sugar & Spice not all things are nice...

Not a lot! It isn’t a book that you ‘like’, more have to read and can’t put down (according to reader reviews). I think the appeal of Sugar & Spice is the taboo subject and the frightening insight into the mind of a paedophile.

There is a very long story to this and can be found on several blogs and websites in previous interviews, but basically, it was inspired by the Robert Black murders in the late 80’s and another criminal who begged a judge to lock him up in case he killed again.

I (Sarah) have written in some form for as long as I can remember, from scribbling in exercise books after school right up until I started to take it seriously.

When I posted some excerpts on a site called Youwriteon and started getting positive feedback. Before then, I had never showed anyone my writing.

I have started writing a book many times in my life, as far back as my early teens, but life always got in the way.


You’ve recently hit a milestone where you’ve reached 50,000 books sold for Sugar & Spice. What’s your first reaction when you reflect on that accomplishment?


Describe your journey from being a new author publishing your first book to selling 50,000 books. How did you do it?

A crazy, roller-coaster ride! One minute, I was telling my parents over Christmas dinner that I had co-written a book and less than five months later, we are getting calls from New York and over 50,000 people have downloaded the book. Crazy! I don’t know how we did it. There isn’t a secret formula, just lots of social interaction, blogging, Tweeting, Facebooking, a lot of luck and I guess, having written something that people want to read!

Sugar & Spice is a crime thriller, as is the next book, Snow White (this is part of The Rose Red crime thriller series) and it is a genre that I enjoy reading and have always wanted to write in. However, not everything SD produces will be in this genre, we also have the first of a dark, urban fantasy trilogy due out before the end of the year, Equilibrium.

Fly be the seat of our pants and let the characters and the story write itself!

When we finish Snow White (in between A LOT of promotional work for S&S) it will have taken us approximately 4- 5 months, but that is due to me not being free to write full time at the moment. We envisage that when I am, we will complete first drafts within 3 months.

Initially, due to the content of S&S, now – because of the control that it gives us in the current publishing climate.

Read lots, pay for a great cover and proper editing services and be prepared to spend the rest of your life online!
Posted by Unknown at 5:46 PM