Interview with Nicholas A. Rose

Bio:
Nicholas A. Rose is the author of the “Markan Empire” trilogy. He loves everything to do with the sea, the outdoors, photography, movies and writing. He also enjoys the rather more sedentary hobbies of reading, real ale and chess. For those who must know, the “A” stands for Andrew.

How would you describe your book?

Epic or heroic fantasy. The sub-genres have become so blurred at the edges nowadays, maybe I should just say fantasy. 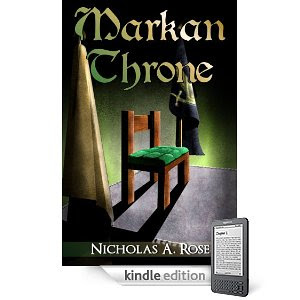 It’s impossible to say what readers will like about a book. I hope they enjoy the interplay between the characters and the way these guys develop. The plot is very character-driven and shows how they deal with events threatening to sweep them along, in many cases unwillingly.

I was doing background work for another story, which included writing a list of rulers. One of them stuck out and the idea for the story came from that. I kicked it around for a few months, then started to write it.

The story for which I was doing the background work was forgotten. Or is it lying around in a desk draw somewhere…?

Off and on, I’ve been writing all my life. Even in school I turned in story essays twice as long as my classmates’ efforts. I started writing books in 1989. And those early efforts are **definitely** still with me – they’ll be rewritten one day.

When did you realize that you were a serious writer?

When I completed my first trilogy. By then, it was obvious I had the stamina to do it.
When did you decide that you wanted to write a book?

It was something that had always lurked in the back of my mind. Like 99.999% of writers, I’m also an avid reader, and I’ve always wanted a slice of the action.

I write the first paragraph, followed by the last paragraph. Then it’s just a matter of joining the two together. I usually have a broad outline of the plot and a few set-pieces ready for inclusion, but the book’s development is very fluid and flexible. Writers who plan everything out to the nth degree have my serious respect, but I can’t work that way. My method is very editing-heavy though, so I don’t recommend it if you can work the other way.

Once I know where I’m going with the story, the first draft is written very quickly, often 6-8 weeks. While writing, I’m more or less living with my word-processor, as every spare minute (not to mention lots of minutes when I should be doing something else) is spent on the project.

However, the editing takes a lot longer and I usually have to do a lot of rework.

Why did you publish on Kindle and other eReaders?

Unless already a celebrity, or with a lot of contacts in the mainstream publishing industry, the chances of your work being read, let alone considered for publication, is very slim. A new writer is a huge risk to a publisher, especially when nobody has ever heard the name before. ePublishing gives us a chance; at the very least we stand or fall on our own merits, our fate decided by readers, not middlemen.

Go for it. You have nothing to lose and everything to gain.
Posted by Unknown at 6:13 PM