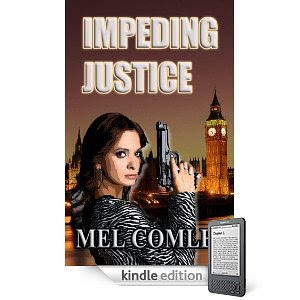 Impeding Justice features feisty new Brit Cop, DI Lorne Simpkins in a gritty crime novel set in London. After The Unicorn kills her partner, Lorne knows if she doesn't bring the underworld criminal to justice soon, she will be his next target. It's a race against time, she has a 24 hour deadline to meet before her kidnapped daughter is used as a human bomb by the Unicorn. Can Lorne track the criminal down before it's too late...

Mel Comley left her job as a store manager in Worcester and moved to France nine years ago despite never having set foot in the country before. She renovated a French property, decorating 22 rooms in six months.

Renovation completed, she began to follow her dream of becoming a writer. After completing a creative writing course she penned a romance which was a near-miss with Mills & Boon. Then she decided to turn her hand to crime writing and DI Lorne Simpkins was born.

Impeding Justice is the first in a series of novels featuring Lorne Simpkins. The book has gained a Gold Star on the writer's site, Authonomy, with a Harper Collins editor saying, "It keeps the reader focused on the dramatic interest of the story."

One of Mel's biggest influences in James Patterson and she hopes she has achieved her aim of making Lorne as memorable as his ‘Alex Cross’.

Impeding Justice has reached number 37 in the Amazon Kindle chart and Mel hopes it will be available in print in the near future. The sequel Final Justice was released in February 2011.

In her spare time, Mel loves pottering in her garden which has, for the past few years, won a local award. She also enjoys painting and walking her dogs.

A fast-paced thriller with a female cop who never gives up, no matter what obstacles stand in her way.

Most of the readers who have contacted me said they couldn’t put it down, “it was crying out to be finished”.

I discovered thriller writer James Patterson and one particular character in his books sparked the idea.

I think my antagonist is far worse than his though. ;-)

About nine years ago, although I’ve always jotted down things in my past, be it a diary or short stories for nieces and nephews.

About five years ago, when I started writing Cruel Justice the first book in the Justice series.

This is yet to be released and with my agent right now.

I suppose the ambition has always been buried somewhere, it was just finding the time to do something about it.

Since my divorce I’ve always had to work 60-70 hours a week, that doesn’t leave much time for anything else.

I spend a good month plotting and working out all the details, another couple of weeks researching police procedures etc. Then get stuck in to the job of creating the characters and story.

That depends really, I suppose anything from a year to eighteen months.

Why did you publish on Kindle and other eReaders?

I started sending out Impeding Justice to agents in the UK and had about five rejections, not many I know. I believed in my product, then I heard about the opportunity to upload as an ebook and the rest is history.

Sales have been pretty brisk and this has led to a few agents contacting me.
I recently signed a contract with top New York agent Richard Curtis.

Have confidence in your work and employ a GOOD editor. If you’re going down the Indie route don’t expect to sell your work without A LOT of effort on your part. It’s one third writing, two thirds marketing.

Finally, upload your first book and immediately start writing your second, then your third.
Posted by Unknown at 5:01 AM