I’ve been a practicing Doctor of Chiropractic for twenty-two years. I began writing fiction in 1994, partly because I simply wanted to and partly because I had some free time. I’m married with three grown sons and two step-daughters who live with my wife and I.

I tried publishing my books through traditional avenues. All I got was a stack of rejection letter and emails, mostly impersonal responses. I had two complete manuscripts when I Googled onto Smashwords and discovered self-publishing. 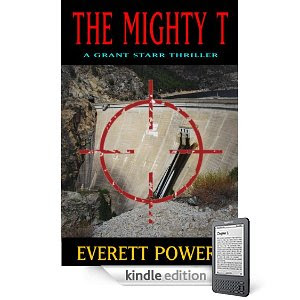 Detective Grant Starr and his buddy Detective Ralph Bensen took the day off to catch a Giants’ game, but their plans are cut short when a lunatic starts shooting people from the top of a twelve-story hotel. The shooter is crazy, but he’s also crazy-good with the sniper rifle.

The gunman’s found dead and Grant has no idea who he is or why he killed nine people, apparently at random. When two more are murdered the following night, Grant finds a thread connecting the eleven killings.

Unfortunately, he’s up against a well-funded fanatical eco-terrorist with a gang of hired mercenaries. After a building housing giant pumps in the San Joaquin Delta is blown up with a fertilizer bomb, Grant chases the gang into the foothills, then to the Hetch Hetchy Valley in Yosemite National Park.

The unthinkable happens: the O’Shaughnessy Dam at Hetch Hetchy is attacked with multiple bombs. It fails in a most spectacular way and a sixty-foot-high wall of water is sent hurdling down the mountain...

Can Grant and his team stop what would be the worst U.S. disaster since 9/11?

They’ll like that I don’t bog the story down with a lot of police procedures like many crime or detective books do. I wanted the book to be about the characters and the issues behind the river, not DNA strands and luminal. The characters are fascinating, especially the main bad guy, John Lightfoot, and the prose is easy to read; the story zips along. Readers who love action will love the explosions and the nail-biting finish.

I don’t recall now how I came up with the premise. Most likely there was an article in the paper about low salmon counts in the Tuolumne River, or the dam at Hetch Hetchy, and a light went off in my head. Once I got the beginning down I ran with it. Writing THE MIGHTY T was a great ride.

I started writing fiction in 1994. I’d get up at 5:00 a.m. and drag myself into the spare bedroom, plop down in front of an old Windows 95 computer and boot up Word. I’d also write on weekends or holidays when we didn’t have plans. I tried to write every day.

About two months ago, after I became immersed in the world of self-publishing. Prior to that I thought no one but my family and friends would read my books. Realizing very few writers become overnight literary stars, I have long-terms goals I believe I can accomplish.

I decided to write a novel in 1994. I like my reads to be long enough to really get me involved, 350 pages or more. I don’t read many short stories. That’s why I write novels.

I write books I would like to read, so first I find a premise that fascinates me. If it won’t captivate me, it won’t hold the interest of others like me. Once the idea is developed enough to start writing, I start writing.

I write the first draft as quickly as I can to get the story down on paper. I write in Courier, a monospaced typeface, so I don’t get distracted by formatting. On the PC I write in Scrivener or OmmWriter because they have full screen modes that get rid of computer clutter like menus and thesauri. I recently got an iPad to replace my six-year-old notebook computer. With the Apple Bluetooth wireless keyboard, and the iA Writer or OmmWriter apps, and noise-canceling earbuds or headphones, I can write anywhere.

Once the raw text is generated, it’s organized and edited in Scrivener. Everything goes into Scrivener; all my research and notes, and of course the book text. When I’m done working with the book in Scrivener, I export to Word for final formatting and editing.

CANALS wasn’t plotted at all. That was a lot of fun but difficult. THE MIGHTY T was loosely plotted; I had a general idea of what I wanted to happen before I started writing. The book I’m working on now, the second Grant Starr novel, is decently plotted. I have a good idea what needs to happen when, and to whom. I still discover things along the way, and that’s the joy of writing.

When it’s ready to publish, I go to Smashwords first. After the manuscript goes through The Grinder, I check the appearance of the various formats, especially the .epub and .mobi. I run the .epub version through an on-line checker to make sure it’s OK. Formatting has to be immaculate or the book will look like it was published by am amateur. People generally don’t want to buy stuff from amateurs; they want their money’s worth.

I upload to Amazon and Nook myself. The royalties are better and I can make changes to the blurbs and reviews quickly, without having to go through Smashwords. Uploading to Kobo and iBooks is a pain, so I let Smashwords do that for me.

I plan on getting beta readers for my work in progress. It’s important to have other eyes look at your writing. No, it’s critical. Editors cost a grand on up and I’m not ready to shell out that kind of money just now.

It took about four months to generate the first drafts for both of my published books. Editing’s another story.

eReaders are the fastest growing segment of publishing and, I believe, the future of mass publishing. I don’t think print books will ever disappear but in the not-to-distant future, every home will have one or more eReaders. I think schools will soon distribute textbooks on an eReader of some kind to save money. I do 90% of my reading on my iPad, mostly in the Kimble app but also on the Stanza app.
What kind of advice would you like to share with an aspiring writer who’s looking to publish a book for the first time?

Have realistic expectations: you have .0001% chance of “making it big” right away. I’ve seen several Twitter “friends” become discouraged two or three months after they self-publish because they’d only sold a few books. I think a couple have thrown in the towel. John Locke, whose advise I quote below, said he had $47 in combined eBook sales last September. Now he makes $150K a month. He persevered and followed his plan.
Jack Konrath’s advice is good: 1) Write a good book. 2) Give it a professional cover. 3) Write a good blurb. 4) Make sure the formatting is faultless. 5) Keep doing the above until people can no longer ignore you. This is pretty much my plan.
John Locke gave some good advice in an interview. He’s selling extremely well so it seems we should listen to what he said: Know your target market, design and write for them. Ignore everyone else. He’s found his market and does a good job of giving them what they want: a quick, breezy read for a buck.
Posted by Unknown at 12:10 AM